Sultan Ahmed Mosque, also known as the Blue Mosque. This beautiful mosque is located in the center of old Istanbul, and was built by Sultan Ahmed I of the Ottoman Empire.

According to visitors and history experts, this mosque is one of the most beautiful attractions in Istanbul.

Have you ever wondered why this mosque is known as the Blue Mosque? Join us on a guided tour to find the answer to this question together.

This mosque, built during the Ottoman Empire, is one of the impressive examples of architecture and design in that era.

With 6 minarets and several domes, the Sultan Ahmed Mosque is considered, in addition to the Hagia Sophia, one of the most important monuments in Istanbul, Turkey.

It may be difficult for you to imagine, but the importance of completing the construction of the mosque for Sultan Ahmed I was so great that he was sometimes directly involved in the building process of the mosque! Of course, we must add that Sultan Ahmed was only able to use this mosque for one year, and at the age of 27, he died just one year after the construction of this mosque was finished.

His body was buried in the outer courtyard of the mosque itself.

This mosque building is rectangular and includes 5 main domes, 6 minarets and 8 small domes. One of the five main domes in this mosque is larger than the other four domes and is located in the center of it.

The original building, which was built, consisted of a mosque containing a school, hospital, residence, primary school, bazaar, Sultan Ahmed’s palace and tomb. Of course, these buildings were destroyed in the nineteenth century.

This most unique feature of the mosque is the 6 beautiful minarets that can be seen from afar (We will talk in detail about these minarets).

The reason for the distinction of Sultan Ahmed Mosque

As you know, mosques usually have two or four minarets, but the blue mosque with its six unique minarets has become one of the most magnificent in the world.

Behind the construction of these six minarets is an exciting story.

Whereas in the Turkish language, the two words (altin), which means gold, and (alti), which means six, are the same, and when speaking, the speaker and listener must be well versed.

Of course, this did not end easily. As the Grand Mosque in Mecca also had six minarets, which caused much controversy. For this reason, Sultan Ahmed sent the architect to Mecca to add the seventh minaret to the Grand Mosque.

Why is Sultan Ahmed Mosque known as The Blue Mosque?

In fact, It’s called the blue mosque only because of its interior that is full of blue tiles. Except most of the blue tiles of this mosque are currently out of the reach of visitors and are located on the upper floors of the mosque.

Inside the Blue Mosque there is a very high ceiling decorated with 20,000 pieces of blue tiles. Ancient mosque tiles contain designs of flowers, trees, and other traditional patterns decoration.

The Royal Pavilion is one of the most interesting parts of the Blue Mosque, which was first seen in Ottoman architecture, and includes two rooms and an arch.

At the top of this section is the Sultan’s Residence. The finest types of tiles were used in this section.

The mosque’s interior design includes verses from the Noble Qur’an, which were decorated by Seyyid Kasim Gubari, one of the best calligraphers of the time. The floor of the mosque is furnished with carpets donated by the faithful. Of course, these carpets are replaced as soon as they become old.

This mosque contains 8 sub domes. Each dome in the Sultan Ahmed Mosque has 14 windows. While the central dome also contains 28 windows.

The large chandeliers are one of the most exciting things in the Sultan Ahmed Mosque. Where ostrich eggs have been used on these chandeliers, because they expel spiders and prevent the spider web from closing.

The eggs were kept in glass containers. There were precious jewels and jewelry on the glass of lamps and candles, most of which were looted over time or placed in museums.

The courtyard of Sultan Ahmed Mosque

In the middle of the courtyard, a flat hexagonal drinking fountain was made with six marble columns. It is worth noting that this drinking fountain was decorated with a domed ceiling with an engraved bow, which of course was replaced by a simpler and smaller dome, and today it no longer has water.

Stand up and give yourself a chance to look around. You will see that the entire courtyard of the Blue Mosque is surrounded by identical motifs and 26 columns, each with a dome over it.

If you look closely, you will notice that the balconies and domes in the part connected to the mosque and the fourth side are slightly higher and wider. Water faucets and ablution can be seen on both sides of the mosque’s courtyard.

The nave of the Blue Mosque

Now is the time to enter the courtyard of this Mosque, to see its undeniable splendor close-up.

Every part you look at has a lot of colors and designs, and it’s very difficult to separate one another! It takes a few minutes to understand the beauty in the different corners of the nave.

The bottom of the columns can be seen, with traditional tiles, drawings and special Turkish paintings. It is interesting to know that the number of these handmade tiles reaches about 20,000 and more than 50 different designs of tulip flowers can be seen in them.

The altar of the Blue Mosque

The altar is one of the most important parts of the Sultan Ahmed Mosque, and it is beautifully carved entirely from white marble, and its glory is completed on top with outlets and waterfalls.

Directly above the altar, there are two signs in green with golden inscriptions. It is interesting that many colorful windows were built around the altar. And if you look closely, you can see that the walls surrounding the windows are not marbled and are covered with carved tiles.

On the right side of the altar, there is a long platform with unique decoration that attracts attention. If you go back far enough, you can see the golden and pyramidal shape on top.

The imam of the mosque goes to this pulpit to speak and give speeches. Interestingly, the pulpit of the Sultan Ahmed Mosque is designed in such a way that all people can see the imam and listen to his words.

In the upper parts of the Blue Mosque there are shapes and geometric circles in bright red and blue, but most are not original.

The distinct part of the tiles of the Sultan Ahmed Mosque can be seen in the middle of the temple, which fascinates the eye of the beholder.

The frequent and harmonious design and colors of the Iznik tiles give a wonderful glory to the interior of the mosque, in a range of bright and attractive colors such as blue, turquoise and green.

On the blue tiles, there are traditional designs such as cypress, lily, roses and various fruits.

The use of these designs in the tiles of the Blue Mosque was by an official order of Sultan Ahmed I, and it was the first time that such wonderful and detailed decorations were used inside a mosque with Ottoman architecture.

How to go to Sultan Ahmed Mosque?

To enter the Mosque. People must cross the mosque hallway and climb several steps to reach the main entrance. 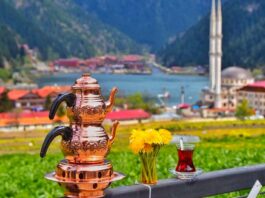 Uzungol village in Turkey – the most famous and charming natural... 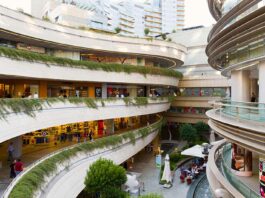 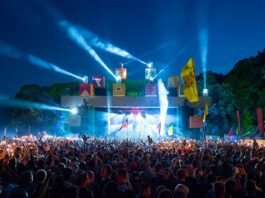 Istanbul Festivals – All the festivals held in Istanbul throughout the... 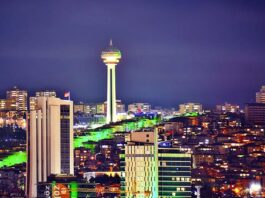 Ankara Travel Guide – All you need to know about the...

Çırağan Palace – the last palace of the Ottoman Empire 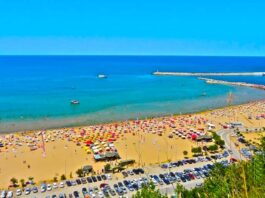 15 Best Beaches In Istanbul Where You Can Enjoy The Sun...